How does a 3D printer work step by step? 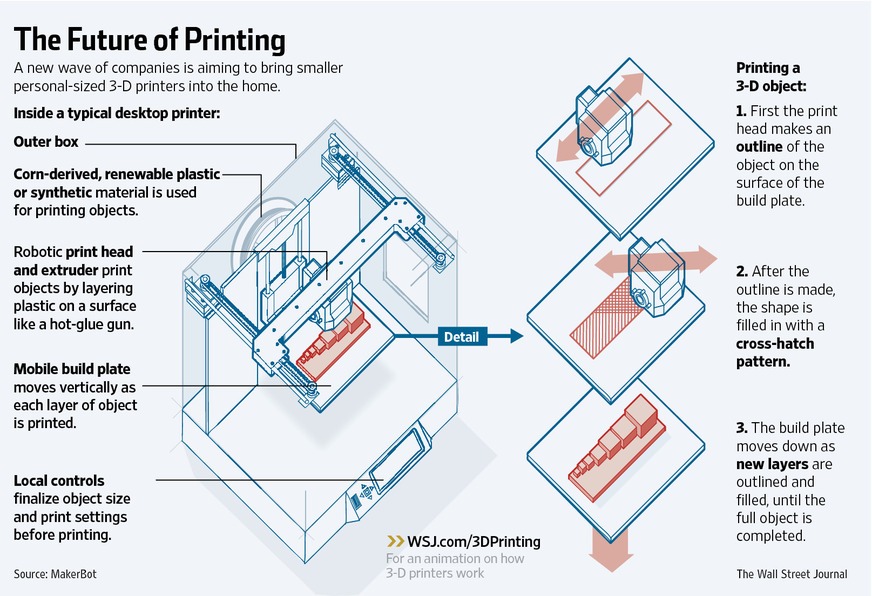 Have your wondered how amazin 3D Printing is and how does a 3D Printer work?

Read on to get more info on it.

A book lover knows the feeling of grasping an actual book while reading it. Kindle or reading a book on a phone is just not their thing. Similarly, there are people who don’t just like to see a picture of a molecule or a vintage car model printed on a piece of paper.

Even though watching molecules dance in a video are cool but it’s not the real experience right? This is exactly what 3D printer enables, making that picture come alive so that one can see it in a three dimensional light.

Even the best artists struggle to show us what real-world objects look like in all their three-dimensional (3D) glory. Most of the time that doesn’t matter—looking at a photo or sketch gives us a good-enough idea.

But if you’re in the business of developing new products and you need to show them off to clients or customers, nothing beats having a prototype: a model you can touch, hold, and feel.

Only trouble is, models take ages to make by hand and machines that can make “rapid prototypes” cost a fortune (up to a half million dollars). Hurrah, then for 3D printers, which work a bit like inkjets and build up 3D models layer by layer at up to 10 times the speed and a fifth the cost.[Source]

But how does a 3D printer work step by step?

Imagine building a conventional wooden prototype of a car. You’d start off with a block of solid wood and carve inward, like a sculptor, gradually revealing the object “hidden” inside. Or if you wanted to make an architect’s model of a house, you’d construct it like a real, prefabricated house, probably by cutting miniature replicas of the walls out of card and gluing them together. Now a laser could easily carve wood into shape and it’s not beyond the realms of possibility to train a robot to stick cardboard together—but 3D printers don’t work in either of these ways! A typical 3D printer is very much like an inkjet printer operated from a computer. It builds up a 3D model one layer at a time, from the bottom upward, by repeatedly printing over the same area in a method known as fused depositional modeling (FDM).

Step 1: CAD —Produce a 3-D model using computer-aided design (CAD) software. The software may provide some hint as to the structural integrity you can expect in the finished product, too, using scientific data about certain materials to create virtual simulations of how the object will behave under certain conditions.

Step 2: Conversion to STL —Convert the CAD drawing to the STL format. STL, which is an acronym for standard tessellation language, is a file format developed for 3D Systems in 1987 for use by its stereolithography apparatus (SLA) machines . Most 3-D printers can use STL files in addition to some proprietary file types such as ZPR by Z Corporation and ObjDF by Objet Geometries.

Step 3: Transfer to AM Machine and STL File Manipulation —A user copies the STL file to the computer that controls the 3-D printer. There, the user can designate the size and orientation for printing. This is similar to the way you would set up a 2-D printout to print 2-sided or in landscape versus portrait orientation.

Step 4: Machine Setup —Each machine has its own requirements for how to prepare for a new print job. This includes refilling the polymers, binders and other consumables the printer will use. It also covers adding a tray to serve as a foundation or adding the material to build temporary water-soluble supports.

Step 5: Build —Let the machine do its thing; the build process is mostly automatic. Each layer is usually about 0.1 mm thick, though it can be much thinner or thicker. Depending on the object’s size, the machine and the materials used, this process could take hours or even days to complete. Be sure to check on the machine periodically to make sure there are no errors.

Step 6: Removal —Remove the printed object (or multiple objects in some cases) from the machine. Be sure to take any safety precautions to avoid injury such as wearing gloves to protect yourself from hot surfaces or toxic chemicals.

Step 7: Postprocessing —Many 3-D printers will require some amount of post-processing for the printed object. This could include brushing off any remaining powder or bathing the printed object to remove water-soluble supports. The new print may be weak during this step since some materials require time to cure, so caution might be necessary to ensure that it doesn’t break or fall apart.

Step 8: Application —Make use of the newly printed object or objects. [Source]

What material does a 3D printer use?

3D printing materials can range from materials including metals, resins, ceramics and more. The most popular material is plastic and most of the desktop style printers, print objects using plastic. But high-end 3D printers are capable of using many different materials. The types of 3D printing materials that can be used depends on the products to be manufacture. You can’t use human body cells, as a material to prepare an aerospace machine model! The materials not only vary in types but differ in state, form and shapes. It can be filament, granules, powder, etc. [Source] To see exactly how a 3D printer brings objects to life and how this process unfolds, watch how does a 3d printer work video here. By now it is quiet evident that 3D printers are much more cooler than you had thought it would be.

Well now you know how does a 3D Printer work, If you have any queries please leave a comment below.

Read more on what all objects you can 3D print, and how can you use it as a medium to mass manufacture products. Also it is interesting how it can save millions of lives and how it has been a major contributor to the medical industry.

Opportunities in the Semiconductor industry

Impact of EV on Component Manufacturers

Automation, Robotics, And The Factory of The Future

What Are the Advanced Industry 4.0 Technologies?